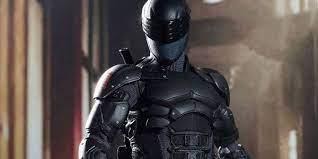 Snake Eyes, the GI Joe spin-off coming to the theaters in 2021, is going to star Henry Golding playing the lead role. You may know Henry Golding from his casting in Crazy Rich Asians, but you can be sure that cast as Snakes Eyes in a ninja costume will be a total break from that role! For those who do not know much about this dark and mysterious ninja, Snakes Eyes has been part of GI Joe Origins since 1982. Snake Eyes was always an elusive character, and he was clearly not the archetype hero. He was masked, silent and somewhat dehumanized in his role. In interviews, Henry Golding explains the challenge to transform the Snake Eyes character from that of a weapon to a hero. In the film, Golding will remove his mask to enable audiences to form a stronger connection to his Snake Eyes.

Of course, G.I. Joe and the Snake Eyes character has existed for many years as a comic book series, toys, animated TV series and video games. The live-action films are a relatively recent addition to this iconic franchise which has a loyal fan base. Snake Eyes is the third cinematic installment following the successes of G.I. Joe: The Rise of Cobra in 2009 (whose cast included Snake Eyes) and G.I. Joe: Retaliation which was released in 2013. Both these action films were commercially successful both domestically and overseas. Not surprisingly, critics widely panned the movie, as is often the case for action films.

We will have to wait and see if fans will connect with Henry Golding’s performance. In the 2013 release of G.I. Joe Retaliation, Snake Eyes was played by Ray Park. His previous appearances included Darth Maul in the Star Wars franchise. Ray Park holds a second-degree black belt in Wushu, and it will be pretty big shoes for Henry Golding to fill. The film is directed by Robert Schwentke, with most of the filming in Japan in 2020. The release date for this film is supposed to be in late October 2021, immediately before Halloween. With plenty of martial arts and fight scenes, expect this film to be released with a PG-13 rating, so this movie will not be suitable for young children.

Whenever a popular movie is released, it is almost bound to inspire a rise in popularity of costumes and other accessories related to the movie’s theme. The expectation is that there will be all sorts of ninja costumes coming onto the market as a direct result of this movie’s release. There were officially licensed GI Snake Eyes, Cobra Commander, and the GI Joe Storm Shadow costumes in the past. With Snake Eyes’ release, expect to see a lot more black and white ninja costumes (Storm Shadow). Katana swords, which are used extensively in fight scenes, should also be popular.

Because this movie will be directed to teenage and more mature audiences, you could expect to see adults wearing ninja costumes this Halloween. That does not mean that you will not see interest in younger kids aspiring to be ninja heroes. Since ninja costumes are one of the best boys costumes ideas and have been a perennial favorite with kids , you will see even more on the shelves and online when you are shopping for Halloween costumes this year.

There are many signature aspects of ninja costumes that instantly recognize people, even though people might not be that familiar. The truth is that ninjas often did their work (fighting and protecting) when they were not wearing what people recognize as the typical ninja uniform. They would have to be on the lookout and blend into their surroundings, meaning that they would have to be prepared to act as ninjas even when they were wearing regular clothes and having the same appearance as everyone else in the surroundings.

The signature uniform of a ninja is referred to as the “ninja-yoroi.” It generally consists of a black jacket and black trousers and light sandals, and a hooded cowl. Often, a ninja costume will be all black, and in some cases, they will have red accents. The purpose of this is camouflage. A ninja does not want his or her enemies to see where they are injured, so they will wear a costume that will make it hard to tell where they are actually hurt. There is evidence that ninjas would wear all white when it was snowing outside to blend in with their surroundings. Sometimes, ninjas would also wear lightweight armor underneath their clothes, which was not visible to anyone outside. Of course, this would not be a concern with a Halloween costume unless you seek complete authenticity with this costume.

In addition to the clothing, there is equipment involved in many cases. A ninja would often wear a “ninja-to,” a type of short sword, on his or her back. Also, they would carry “shuko,” which were weapons that they would wear on their hands. They might also wear tiger claws, which were essentially sharp blades they would wear on their palms. These were effective not only for combat but also potentially for other purposes, such as rock climbing.

Ninjas are also well-known for using throwing stars, also known as shuriken. Many people are familiar with the star shapes, but these thrown objects could be in the form of knives or daggers. The stars were actually not very likely to injure someone, as most of the time, they were not thrown with great accuracy. They were meant more to startle someone and throw them off course if they were trying to chase rather than actually injure.

Ninjas would also work with other types of equipment, such as roped weapons used to hit from a distance or tangle up an enemy, weapons that were mounted on long bamboo sticks, and short blades. They would also often use rope ladders with hooks that they could throw up, which would enable them to climb walls, or small sharp tacks that they would put on the ground for their enemies to step on (known as caltrops). They would carry a variety of other weapons and special healing herbs for themselves, which could help them in case they ended up getting injured while they were completing a mission.

The release of G.I. Joe Snake Eyes is sure to generate interest in young adults and kids alike to wear ninja costumes this Halloween. Already popular with kids, both black and white ninja costumes will be highly sought after this year. Luckily for the kids, they can wear them pretty much anytime at home when they feel like it.

Find Out the Cost Versus Benefits of Invisalign in Bangkok